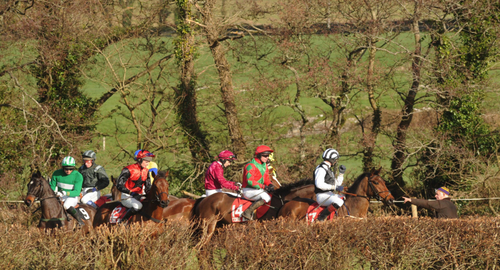 Tallow is held under the auspices of West Waterford Hunt and has been running for over 100 years and is one of the oldest in the country.  It is held annually on the first Sunday in February.

Tallow is steeped in equine history and has some very famous stud farms and national hunt racing stables in the area. Namely The Beeches Stud whose owner Mr Bobby McCarthy is one of the longest serving members on our committee.

Rathbarry Stud is also close by and trainers Liam Burke and Jimmy Mangan are also on the Committee.  We have a very committed group of volunteers from the farming and racing fraternity and we generally are called on to help out with other local point-to-points during the season.

The races have moved three times since inception and are now located on the Conna road outside of Tallow on the lands of trainer Jimmy Mangan.  Jimmy has trained many famous horses over the years with the most notable being Montys Pass winner of the Aintree Grand National.

From Waterford.
Head for Dungarvan and on to Lismore follow signs for Tallow and turn right in the town and follow signs to races.

From Fermoy
Turn left in the square and straight on for Tallow after 4 miles take a right for Coolagown and after village turn left at T junction to Conna and follow the signs to the races.

From Youghal
At Youghal bridge on the by-pass, take the road to Tallow straight on to the town and turn left in the square.