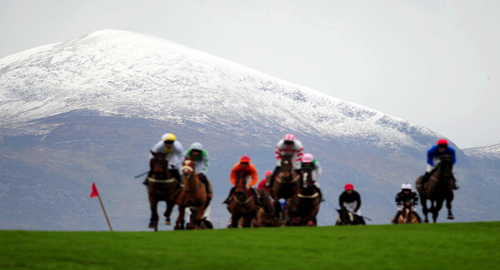 East Down Foxhounds Point-to-Point course at Tyrella is situated at the foot of the picturesque Mourne Mountains made famous by the Percy French song.

With the 2018 Spring season, East Down will have been racing at Tyrella for fifty four years. Two meetings are held each Spring, in January and March.

Normally the first meeting of the Spring calendar in the Northern Region, Tyrella is a right handed undulating track where, given it’s close proximity to the sea and sandy soil is well drained and more often than not, produces good going.

This video from @NotFromHereStories gives you a snapshot of the picture-postcard setting that Tyrella point-to-point takes place in.

Look at this beautiful place...Tyrella Beach Places in Ireland you must see before you die.

Posted by Notfromhere on Wednesday, April 4, 2018

From The South:
Take the M1 North from Dublin. In Newry take the A25 through Rathfriland. In Clough at T junction go right and immediately left to get to Tyrella.

From the West:
Leave the M1 at Lisburn (junction 6). Take the A1 turning off at Hillsborough. Follow the signs to Ballynahinch and then follow the signs for Newcastle. Go through Seaforde village and then Clough. At the end of Clough Main Street turn left, following the sign for Tyrell. The course is on the right after about four miles.

From the North:
Take the M2 to Belfast. Continue on to the M1. Leave the M1 at Lisburn (junction 6). Take the A1 turning off at Hillsborough. Follow the signs to Ballynahinch and then follow the signs for Newcastle. Go through Seaforde village and then Clough. At the end of Clough Main Street turn left, following the sign for Tyrell. The course is on the right after about four miles.

Our point-to-point is located an hour and ten minutes from Belfast airport.

“Tyrella point-to-point is located beside Abercorn Army Barracks which were built in 1901 and a picturesque beach”.

A day at Tyrella point-to-point races is the ideal day out for all the family in the heart of the Mourne Country.

Access for spectators is directly from the road into the car park which is adjacent to the start/finish straight. Visibility is excellent and the whole course can be seen from everywhere.
This allows racegoers to get up close to the action, often from the comfort of their car, should they wish to bring their own picnic for the family.

We have bookmakers on site and some will also show and take bets on track racing in both Ireland and England.

For those who would like something stronger, we have a bar serving a selection of alocoholic beverage

We don't have a dress code but do recommend suitable clothing, a perfect excuse to get the wellies out !

Yes, no problem at all but they must be kept on a lead at all times.

Yes, we welcome visitors to bring their own picnics or refreshments but why not treat yourself to something from our outside caterers from your race winnings.

No, we do not provide an ATM so we recommend that you make a stop in the nearby towns on your way to the races

One of the real treats of racing at Tyrella, is just how close racegoers can get to the action. Watch the horses

being saddled up by their trainers before making your way to the parade ring where the horses, jockeys and connections gather to discuss their pre-race tactics.

There was very little separating CADDYHILL and Brother Byrne when they both made their debuts at Oldtown last month, with the former looking to provide Colin McKeever and Wilson Dennison with further success in this race having won it in the past with leading Cheltenham Festival hope Ballyward. Steal The Thunder also made his debut in that Oldtown maiden but was well held, whilst the market will give the best guide as to what can be expected from the newcomers.

RAREST DIAMOND was only headed in the closing stages at Dungarvan in a thrilling finish to her debut and she should be more than up to winning a race like this as that is a maiden that is already beginning to work out well. Frank And Honest was unlucky to depart at the last on her debut around here in January and is the obvious danger. Our Bonus ran a big race against a previous winner in the hunt race at Armagh, Uppertown Poppie has been on the go plenty of late and only got as far as the first around here in in January, whilst the luckless Lady Maureen may be able to take a step forward following a confidence boosting run at Punchestown.

UP THE STRAIGHT will likely have conditions in his favour here as the son of Arcadio returns from a mid-season break, having last seen competitive action when second in a four-year-old maiden at Dowth Hall in October. He had the measure of Tardree on that occasion, however it was only the Mahler geldings debut on that occasion, so he can be expected to get closer here. Lifeisahighway disappointed at Dungarvan last time and will hopefully bounce back, whilst Military Chief is a newcomer that has to be respected.

For Certified Hunters aged 4 years old and upwards, the property of subscribers to any Hunt in Ireland, which have not won a race under the Rules of Racing or Steeplechasing in any Country and not more than three Point to Point Steeplechase of any description. No Penalties. Mares allowed 5lbs. 4-y-o Maidens Excluded.
(Prize Money €1950: 1st €1365, 2nd €390, 3rd €195)
Weights: 4yo 11st 11lbs 5yo 12st 2lbs About 3 Miles

Fourth at Limerick over Christmas, KADMER could return back between the flags here as he looks to follow up his Portrush victory from October. He had the measure of Star Wizard on that occasion, which may leave Perpignan as the big danger. The Eddie Power-trained seven-year-old comfortably accounted for Getaman at Oldtown and may find ground conditions more suitable here, having been well beaten at Kildorrery last Sunday.

For Certified Hunters aged 4 years old and upwards, the property of subscribers holding a valid Hunter Certificate to the following Hunts: East Down, North Down, Co. Down, Iveagh and Newry, and in the owners possession before 1st January, 2019, which have not won a race under the Rules of Racing or Steeplechasing in any Country other than Point to Point Steeplechases. The first East Down Farmers horse past the post will be presented with the East Down Farmers Cup. No Penalties. Mares allowed 5lbs. 4-y-o Maidens Excluded.
(Prize Money €1750: 1st €1225, 2nd €350, 3rd €175)
Weights: 4yo 11st 11lbs 5yo 12st 2lbs About 3 Miles

A wide open race that Sean McParlan has won in the past and he could be represented by two track recruits in Canitbe and Lennonstown Lad. Little Battler finished fourth at Kirkistown last month and will find things easier here, whilst Is This It is the only previous winner in the race having won his maiden at Moira in 2017.

For Certified Hunters aged 6 years old and upwards only, maidens at starting, the property of subscribers to any Hunt in Ireland. Mares allowed 5lbs. For Novice Riders who, at the start of the day, have not ridden more than fifteen winners under any Rules of Racing or Steeplechasing, including Point to Point Steeplechases.
(Prize Money €1750: 1st €1225, 2nd €350, 3rd €175)
Weights: 12st 2lbs About 3 Miles

DORAN THE LEGEND can likely be excused his disappointing defeat at Kildorrery in the deteriorating conditions last Sunday, and would have big claims here on his fine second at Ballyvodock three weeks earlier. Fiddler Of Dooney is the big danger having been brought down at Punchestown when set to play a big role in the finish, whilst Nabraska ran a fine race on debut around here in January, finishing fourth to a Gordon Elliott-trained track recruit who only lost out over hurdles at Ayr by a short-head during the week.