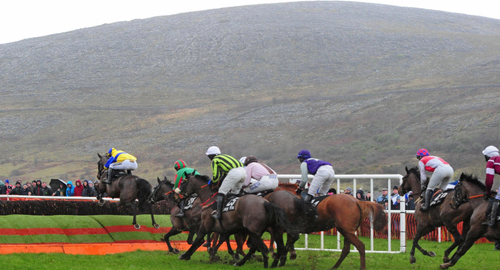 The first race meeting to take place at Bellharbour was in 1817, when the Burren races were held at the strand at Munnia, organised by Bindon Scott and Burton Bindon who also acted as stewards.

Nowadays the races in their current format take place on the first Sunday of February. The track is situated between the wild Atlantic and the majestic Burren and this makes the point-to-point in Bellharbour one of the most picturesque meetings in Ireland.

Bellharbour has proved to be an excellent source of young talent in recent years.
Dlauro, now with Joseph O’Brien won his maiden here two years ago and Gordon Elliott’s Ball D’Arc was a winner at Bellharbour in 2015 and has since gone on to perform at the highest level including 3rd in the Grade 1 Ryanair Novice Chase at Punchestown and winner of two Grade 3’s at Naas.
Winner of the Pertemps Network Final at the Cheltenham Festival in 2016, Mall Dini, also won at this meeting in 2015.
Other exciting young talent to come from this meeting include bumper winner and recent novice hurdle winner, Way Back Then and Burren Life, also trained by Gordon Elliott, a recent winner of a Novice Hurdle at Thurles and also placed in both Grade 2 and Grade 3 company over hurdles.

Enter MUNNIA, CO CLARE into Sat Nav or Google Maps to get directions to the track

From Galway/Kinvara:
Follow the N18 towards Oranmore. Follow it through Clarinbridge and Kilcolgan. Once through Kilcolgan turn right onto the N67 towards Kinvara. Follow the N67 for 20 km through Kinvara and the racetrack will be on your right-hand side.

From Ballyvaughan:
Take the N67 out of the town towards Kinvara. Follow this road for 11 km and the racetrack will be on your left hand side.

From Dublin/Limerick/Shannon Airport/Ennis:
Take the M7 to Limerick. Continue on to the N18. Follow the M18. Take Exit 15 sign posted for Crusheen. At the roundabout take the second exit towards Crusheen. Once through Crusheen turn left towards Boston. Continue on this road for 24km. Come to a t junction and turn right and then turn immediately left on to the N67. The Point to Point will be on the right.

Bellharbour Point to Point is conveniently situated within 45 minutes of Shannon Airport. Then follow the above directions to reach the track.

“Belharbour point-to-point is located on the edge of the Burren with the track running beside an inlet of the Atlantic ocean”.

We have a number of excellent facilities at the track. We are lucky to have an abundance of car parking space and parking is free to those attending the point to point.

There will have an indoor seated pavilion and a wide variety of stalls including locally produced food and there will also be live racing from Leopardstown Dublin Racing Festival.

There will be portaloos spread throughout the venue as well as a dedicated unit for disabled patrons and changing facilities for babies & toddlers. There will also be a portaloo suitable for disabled access.

The Betting Ring is conveniently located in close proximately to the parade ring and track, throw an eye over the runners before deciding where to place your hard earned cash !

There will be food stalls and an indoor seating pavilion which will allow all race goers to enjoy the day in comfort.

We will have a number of food outlets located at the track for the day which will serve a wide range of hot and cold foods and snacks for our patrons to enjoy. Savoury options include chips, burgers and sausages. There will be a confectionary stand selling a range of sweets, chocolates and crisps.

Alternatively, why not come along early and enjoy a picnic before the action gets under way or take a break midway through the day to refuel from the boot of your car. Our extensive car park is the perfect location to relish the scenic beauty of the location and atmosphere of the races, whilst entertaining friends and family.

We will have a gourmet Barista serving the highest quality speciality teas and coffees throughout the day.

Some of our dedicated volunteers will also be on hand in the indoor seating pavilion to supply patrons with a range of beverages for purchase.

There is no standard dress code for point to points but we would advise anyone attending the races to dress warmly and to be prepared for everything that the Irish weather can throw at them. It is advisable to have appropriate footwear and outer wear for wet conditions. There is no harm is being stylish at the same time!

Dogs are encouraged to attend the point to point especially as there is a dog show which takes place on the day. It is important to note that ALL dogs attending the Point to Point are requested to be kept on a lead at ALL times. The Dog Show has an entry fee of ?3 per class and prizes and rosettes for the winners.

We welcome picnics but we also offer a number of on-course catering options for those who would rather not bring their own food. We ask that those who decide to picnic remember to collect all of their rubbish after them especially as the Burren is a designated area of natural beauty and it is important to maintain that.

There are a number of free activities available on course during the Point to Point to entertain the younger members of the family which include: Bouncy castle Inflatable Obstacle Course Face Painting Dog Show Football Skills Zone Pony Rides

There is no ATM on course and we would advise anyone planning to attend to stop in one of the main towns en route to the racetrack.

As this meeting is a very important part of the local community, extra effort has been made by the committee to enhance the enjoyment of the occasion for all the family. The day promises to be a wonderful day of racing and entertainment for everyone.

There will be many wonderful free attractions such as pony rides, face painting and bouncy castles. Other free attractions that will appeal to the rest of the family are the dog show and a hunt invitational legends race taking place after racing. There will also be food stalls and an indoor seating pavilion which will allow all members of the family to enjoy the day in comfort. The Dog Show will have an entry fee of €3 per dog per class and there will be rosettes and trophies for the prize winners.

This year the last race of the day at Bellharbour Point to Point will be a special flat race with a legendary line-up of racing stars showing their support for Pat Smullen and Cancer Trials Ireland. Paul Carberry, Mikey Winters, Jason Titley, Willy Twiston-Davies and Adrian Maguire are just some of the big racing names who have thrown their hats in the parade ring, to take to the track for 'The Pat Smullen Legends Race for Cancer Trials Ireland'. The legends race has been inspired by Pat Smullen, nine-time Irish Champion Jockey, who was forced into retirement after being diagnosed with pancreatic cancer and is currently undergoing treatment and all funds raised will be donated to Cancer Trials Ireland.