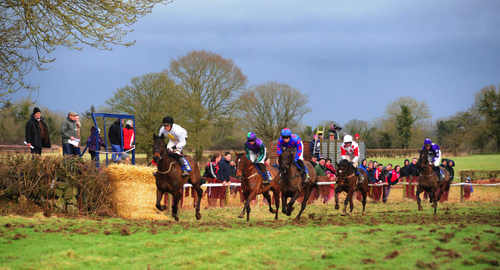 Kildorrery race committee provide an ideal family day out in a picturesque setting with everything close to hand.

Holding their first point-to-point in 1939, races moved to its present venue in 1979. We have been lucky to have been involved in the build up to Cheltenham races in recent years with our meeting being held on the last Sunday to qualify for the Foxhunters. We also hosted a Cheltenham racing press day in 2004.

Notable horses that ran here include Scorpiancer who won his five-year-old maiden on his debut for Eugene O’Sullivan before going on to win the Foxbrook Champion hurdle in the USA.

Other horses of note to have ran here include Monty’s Pass who won the 2003 Aintree Grand National.

N73 from Mitchestown to Kildorrery- turn left in Kildorrey village.
N73 Mallow to Kildorrery-turn right in the village.
Fermoy N8 to Glanworth- follow the road to Kildorrery. At Rockmills village the racecourse is on the right hand side.

Our point-to-point is located fifty minutes from Cork airport.

“Scorpiancer won his maiden at Kildorrery point-to-point in 2014 and went on to achieve Grade 1 success”.

We have free parking for spectators and sections that can be used to facilitate disabled parking with clear views of the track.

We have baby changing facilities and a number of portaloo’s.

Our outside food caterers are located beside the parade ring and bookies and they sell an array of hot food options such as burgers, chips, sausages and chicken goujons.

Also if you would like a treat during your days racing we have a sweet stall in attendance.

All patrons are welcome to pack a picnic style lunch to enjoy during the races.

No, we do not have an official dress code however we advise our racegoers to dress up for the weather so that the day can be enjoyed to the full.

We have an art competition and numerous novelty children races with medals and prizes to the winners.

No we do not provide an ATM so we recommend that you make a stop in the nearby village of Kildorrery on your way to way races.

Our point-to-point is a great day out in a picturesque setting that has something for every race goer.

We have an abundance of attractions for younger racegoers including an art competition and the popular children’s novelty races of welly throwing and egg and spoon races.

For dog lovers there is a dog show with numerous different classes including a rescue dog class.

Also as an added bonus for parents all children U16 have free admission.