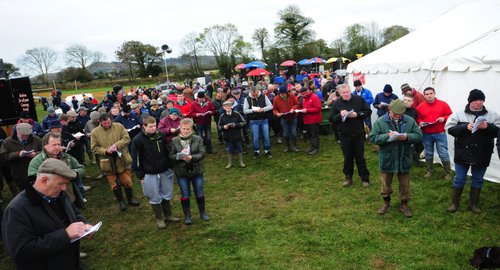 The Wexford foxhounds was formed in 1810 at Slevoy castle.

Our point-to-point has been in different locations over the years including Wexford racecourse, Gowran Park and Lingstown before being moved to its current location at Moorefields in November 2011. We run two meetings a year, one in November and one in February.

Set in the heart of Co. Wexford the course is left handed with a circuit of one mile and three fences in the home straight providing many exciting close finishes.

It is a very fair track of two long straights with two gentle left-handed bends, there are five fences on each circuit which measures a mile a lap.

The track had produced many top class individuals including the likes of Know The Score who won his four-year-old maiden in 2017 and was sold five days later at the Tattersalls Cheltenham Sales for £380,000.

From New Ross– Take the N25 towards Wexford until you reach Ballinaboola. Turn left onto L8025 signposted for Old Ross at the Horse and Hound hotel. Follow the signs for the track from there.

From Enniscorthy - Take the N30 towards New Ross and continue until you reach Clonroche. Take the 1st left turn after the village and follow the signs for the track.

Our point-to-point is located two hours from Dublin airport.

“Ballinaboola point-to-point was first held in its current location in 2011”.

Our free parking is located in the centre of the course which allows racegoers to get up close to the action from the comfort of their car if the weather takes a turn for the worst.

We also provide a disability parking area with fence viewing on the home straight.

If the weather is wet we have temporary roadways laid out to help vehicles going in and out of the course.

We have a hard working committee and many hunt supporters who volunteer their time to make delicious soups, sandwiches, cakes and buns in the catering tent located close to the parade ring.

We also have a fast food outlet that provides tasty burgers, rolls, sausages and chips.

If you would like something a little sweetener our sweet stall sells bars, confectionary and snacks.

No, we do not have an official dress code we just advise our race goers to stay warm and dry and to bring waterproof footwear if the weather turns wet.

No we do not provide an ATM so we recommend that you make a stop in the nearby village of Ballinaboola on your way to the races.

A day at Wexford hunt point-to-point races is an ideal day out for all the family set in the beautiful scenic area of Moorefields which is only a ten minutes’ drive from New Ross.

Racegoers can get close to the action in front of the winning post or at any of the three fences in the home straight. All five fences on the track can be seen from the centre of the course.

Our point-to-point is located forty minutes away from the busy harbour village of Rosslare which has many different ferries operating between England, Ireland and France making our point-to-point extremely accessible for visitors travelling to Ireland for a weekend.